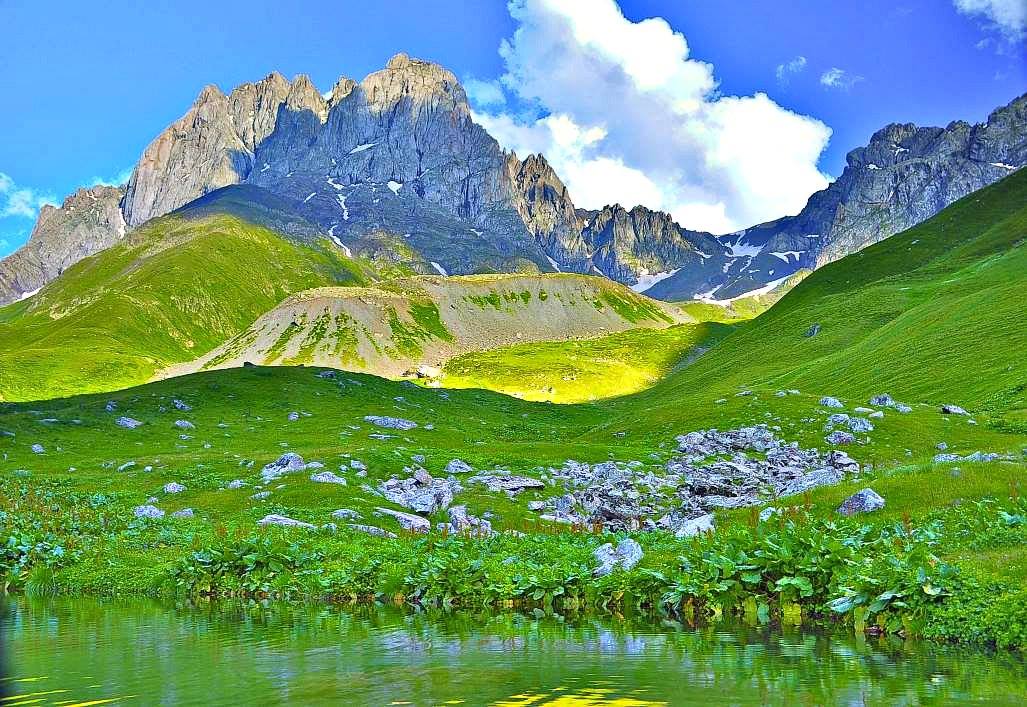 Welcome to Georgia! Georgia is a small, picturesque country in the South Caucasus, with ancient culture and historical heritage. Its history is more than 2500 years old.

Georgia Located at the crossroads of Western Asia and Eastern Europe, it is bounded to the west by the Black Sea, to the north by Russia, to the south by Turkey and Armenia, and to the southeast by Azerbaijan. The capital and largest city is Tbilisi. Georgia covers a territory of 69,700 square kilometres (26,911 sq mi), and its population is almost 5 million. Georgia is a unitary, semi-presidential republic, with the government elected through a representative democracy.

Georgia is situated in the South Caucasus,[109][110] between latitudes 41° and 44° N, and longitudes 40° and 47° E, with an area of 67,900 km2 (26,216 sq mi). It is a very mountainous country. The Likhi Range divides the country into eastern and western halves.[111]Historically, the western portion of Georgia was known as Colchis while the eastern plateau was called Iberia. Because of a complex geographic setting, mountains also isolate the northern region of Svaneti from the rest of Georgia.

The overall region can be characterized as being made up of various, interconnected mountain ranges (largely of volcanic origin) and plateaus that do not exceed 3,400 meters (11,155 ft) in elevation. Prominent features of the area include the Javakheti Volcanic Plateau, lakes, including Tabatskuri and Paravani, as well as mineral water and hot springs. Two major rivers in Georgia are the Rioni and theMtkvari. The Southern Georgia Volcanic Highland is a young and unstable geologic region with high seismic activity and has experienced some of the most significant earthquakes that have been recorded in Georgia.

The Krubera Cave is the deepest known cave in the world. It is located in the Arabika Massif of the Gagra Range, in Abkhazia. In 2001, a Russian–Ukrainian team had set the world depth record for a cave at 1,710 meters (5,610 ft). In 2004, the penetrated depth was increased on each of three expeditions, when a Ukrainian team crossed the 2,000-meter (6,562 ft) mark for the first time in the history of speleology. In October 2005, an unexplored part was found by the CAVEX team, further increasing the known depth of the cave. This expedition confirmed the known depth of the cave at 2,140 meters (7,021 ft).

The climate of Georgia is extremely diverse, considering the nation's small size. There are two main climatic zones, roughly separating Eastern and Western parts of the country. The Greater Caucasus Mountain Range plays an important role in moderating Georgia's climate and protects the nation from the penetration of colder air masses from the north. The Lesser Caucasus Mountains partially protect the region from the influence of dry and hot air masses from the south as well.

Much of western Georgia lies within the northern periphery of the humid subtropical zone with annual precipitation ranging from 1,000–4,000 mm (39.4–157.5 in). The precipitation tends to be uniformly distributed throughout the year, although the rainfall can be particularly heavy during the Autumn months. The climate of the region varies significantly with elevation and while much of the lowland areas of western Georgia are relatively warm throughout the year, the foothills and mountainous areas (including both the Greater and Lesser Caucasus Mountains) experience cool, wet summers and snowy winters (snow cover often exceeds 2 meters in many regions). Ajaria is the wettest region of the Caucasus, where the Mt. Mtirala rainforest, east of Kobuleti receives around 4,500 mm (177.2 in) of precipitation per year.

Eastern Georgia has a transitional climate from humid subtropical to continental. The region's weather patterns are influenced both by dry Caspian air masses from the east and humid Black Sea air masses from the west. The penetration of humid air masses from the Black Sea is often blocked by several mountain ranges (Likhi and Meskheti) that separate the eastern and western parts of the nation. Annual precipitation is considerably less than that of western Georgia and ranges from 400–1,600 mm (15.7–63.0 in).

The wettest periods generally occur during Spring and Autumn while Winter and the Summer months tend to be the driest. Much of eastern Georgia experiences hot summers (especially in the low-lying areas) and relatively cold winters. As in the western parts of the nation, elevation plays an important role in eastern Georgia where climatic conditions above 1,500 metres (4,921 ft) are considerably colder than in the low-lying areas. The regions that lie above 2,000 metres (6,562 ft) frequently experience frost even during the summer months.